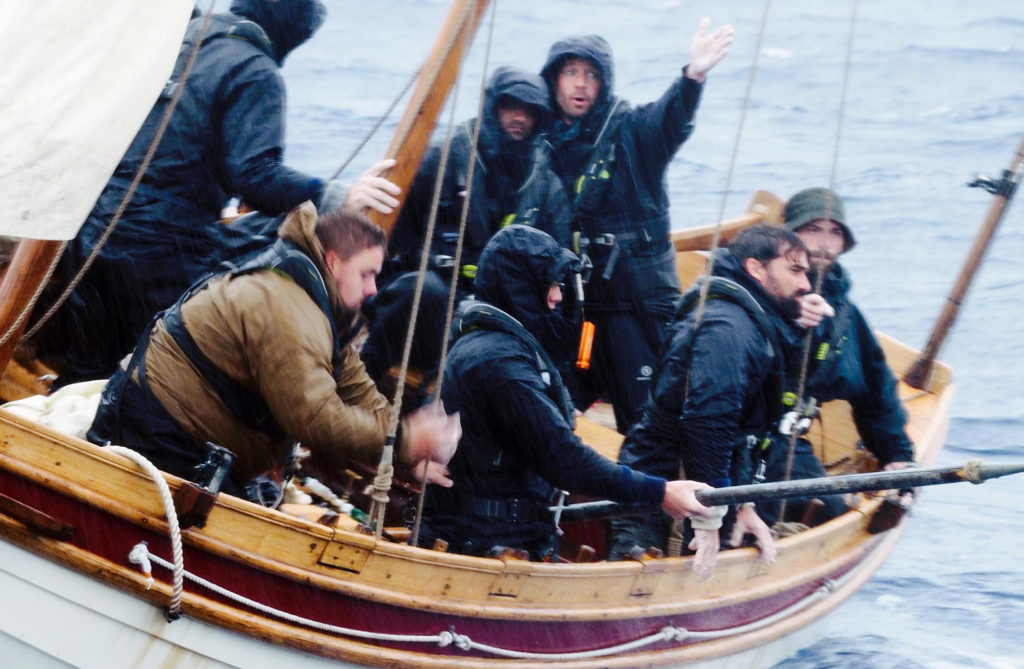 Ok, so now things are getting interesting onboard the good ship Bounty’s End. Chris is causing a great deal of conflict onboard which is unsettling the team. Ant loses his rag with Ben over hygiene in the camp and both Chris and Ben have some nasty infections that are troubling Dr Luke. Ben needs urgent medical support, so is the first to leave the voyage and flies to Sydney for surgery. Meanwhile Ant having lost one guy, has to decide what to do with Chris. Here are my thoughts for dealing with conflict…

There were signs before we departed from Tonga that Chris felt outside of the group. He’s a bright guy, with a passion for sailing and for Bligh’s history, so this was to be his dream voyage. As one of the few crew with some sailing experience, I had him in mind as a watch leader, but during our first day training in Tonga it was clear (for us all) that we were all going to have to make adjustments and learn how to sail this boat. Chris had an issue with authority from day one and felt he knew better than anyone. This caused him to become marginalised as he felt no-one wanted to listen.

Don’t avoid it, nip it in the bud early on.

There are several ways to deal with conflict, but the most important is to address it head on and early before it festers. I’ve sailed in many professional teams where individuals bottle up their feelings and there is no outlet for getting things off your chest. Chris needed to be given some responsibility, so on the leg to Gaua I asked him to take charge of the fishing (he was already complaining about the limited fishing gear onboard!) The lack of food was a serious issue affecting morale and we desperately needed to catch fish (more on this later). This was Chris’s chance to win back some respect onboard.

Sometimes others will sense that leaders are spending more time with the perceived trouble makers than the rest of the crew and that can breed more resentment. Certainly Ant and I spent more time discussing how to bring Chris back into the fold than we did on preparing the crew for the next part of the voyage. He was sucking our attention. My job was not to oust Chris (although he was becoming a safety liability for which I was ultimately responsible), but to support Ant’s decision and find a way to help turn him around. We agreed that he would come under my watch for the next leg of the voyage and I would use the 8-9 days onboard to get him more involved in the sailing of the boat.

Keep some “distance” between you and the team

Leadership can be a lonely place and leaders have to make some of the toughest decisions in the workplace. Getting rid of people is regarded as the worst role that leaders have to tackle and I didn’t envy Ant’s position in this regard. You could see he agonised about what to do. Having lost Ben (through injury) he didn’t want to lose another guy and have a question mark about his own leadership. After all, Bligh was not regarded as a great leader, but he did keep his crew together throughout their ordeal. “Distance” is critical when maintaining discipline. At times you need to put your hand on someone’s shoulder and show some genuine support, but if you’re perceived often as “one of the gang”, it’s far harder to make the tough decisions.

Bligh was known for thrashing his guys and having read his diaries during the voyage, there was very little affection shown towards his crew. He is the first to talk about himself and his abilities, rather than the skills of his crew. This was due in part to having served on HMS Resolution under Captain Cook as the sailing master. Cook was widely acknowledged as a great leader who charted the Pacific, Bligh was a great navigator, but not given credit for his role onboard. Resentment built up and when Bligh got his first command he was keen to show everyone how good he was. A leader’s role is to set direction, earn trust every day and motivate commitment. If you lead by example, your teammates will follow.

Realign goals and focus on the bigger picture.

It’s very easy to lose focus on the main goal when there are so many challenges to deal with getting there. If you set out in a small open boat to navigate 4000 miles, most people would give up before leaving the safety of the harbour. When conflict occurs, as it inevitably will you need to remind people why they signed up in the first place. Describe the finish line and ask your team what it will feel like to arrive in Timor having completed this journey. If your team feel that the success of the trip is down to them, they will be far more likely to stick with you. The heroes in our crew were not Ant or myself, we both had experience of hardship before. The real heroes are the crew members who learnt to cope with the difficult moments and thrived during the good times.

Tell me and I forget, Show me and I may remember, Involve me and I learn

The Mutiny speaking tour kicks off in Exeter on the 27th March, Plymouth University on the 29th March and at the Royal Geographical Society on the 3rd April. More details conradhumphreys.com/mutiny